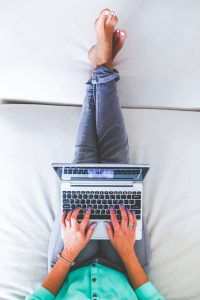 With all the hype about IBM’s decision to ban remote work, the question if working from home is productive or not arose again, stirring lots of debates, lots of pros and cons, and lots of emotions on both sides (employers and employees).

Extensive research was made in the last few years and many companies launched trial flexible hours test programs, predicting that this is the future of work, as confirmed also by a study conducted by Virgin Media Business on 5.000 companies from UK. The study estimated that 60% of employees will work from home in about a decade, businesses already putting into place the infrastructure that would allow it, with fast connectivity and software that would make face-to-face meetings obsolete in the future.  O2 is one of those companies, having launched ““the biggest flexible working initiative of its kind,” allowing a quarter of their 12.000 employees to work from home for a day.

Despite all the controversy around the topic, working from home brings many benefits and it would be a mistake for companies not to prepare the right infrastructure to allow it. According to an experiment conducted by Standford students in 2013, there are many benefits that flexible working hours brings to the company as well as the employee, which would justify entirely the adoption of this work practice by companies:

There are, of course, some disadvantages of working from home, but they are mostly on the social side of business and can be overcome with smart planning and objectives:

Of course working from home is a concept that needs to be adapted to the specifics of each industry and company. There are some industries – direct customer services, like banking for example – where the presence of the employee is mandatory, but how does working from home function when it comes to startups?

I will allow Jason Fried to answer this question for you. Successful startup creator (37signals) and co-author of “Rework”, Fried states that good work is like good sleep, it can only be done if uninterrupted, thus the best work will sometimes happen at home. Watch his TED talk on the topic below:

This site uses Akismet to reduce spam. Learn how your comment data is processed.

I'm really pro for remote working, not just partially working from home like few days (which is somewhat common), but actually full time. I've been working as a developer for three years now in the company that switched from the office to practice teleworking (remote working) and one thing that I'd like to say up front is that people get things done much faster when they aren't distracted. Jason Fried mentioned in that talk that the employer should not be concerned about the employee not working at his home, I disagree. The remote working is not for everyone, that's the… Read more »