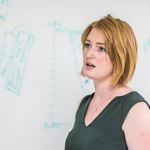 Here at Work In Startups, we’re on a mission to champion the best and most exciting startups in the UK. To support this, we’re starting a new blog series highlighting some of the most innovative and fast-growing startups around. Follow us as we interview startup founders and employees across the country and find out more […]

Here at Work In Startups, we’re on a mission to champion the best and most exciting startups in the UK. To support this, we’re starting a new blog series highlighting some of the most innovative and fast-growing startups around. Follow us as we interview startup founders and employees across the country and find out more about their goals and ambitions, what the future holds and (for all you startup jobseekers out there looking for the inside scoop) what they look for in a prospective employee.

This week, we’re interviewing Lucie Glenday, Founder and CEO of MySense.ai, a wellbeing analytics platform that helps users achieve an awareness of how subtle changes in their health can manifest as changes in wellbeing and their ability to cope in their day to day lives. MySense is growing rapidly thanks to a number of global partnerships and a strong, capable team. They are on track to have their wellbeing platform in over 100,000 homes around the world. We look forward to seeing what they achieve (and they’re hiring for a Frontend Lead, a Senior Severless AWS/NodeJS Engineer, a Business Analyst and a Java/IoT/Linux Engineer on Work in Startups!)

What would you say MySense’s mission is?

What are your values as a startup employer?

Being positively brilliant! We see ourselves as a family that doesn’t follow the crowd. We aren’t afraid to ask difficult questions and be wrong – this is important for growth and development.

As for the people that we recruit, we put people’s personability before skills and experience. We firmly believe that you can teach skills and experience, but it’s harder (if not impossible) to change someone’s personality and attitude. In conjunction with this, we really value compulsive learners – so people that are always hungry to learn more and grow. Lastly, we look for people that are respectful and actively listen. There are people that listen but you know they’re not really taking it in. We want people that absorb and digest what others are saying before showcasing their own views and opinions.

We have a 5/5 rating on Glassdoor, which I believe is reflective of the time and effort we put into ensuring we get the right people through the door. We ask a lot of tough questions in the interview process and it’s definitely quite intense, but it’s a key reason we have such an incredible work force. It’s also partly why we have such a low churn rate – until a month ago we didn’t lose anyone we didn’t want to lose! This is also reflective of the fact that staff love working here and we invest in our employees.

We are also a globally focused work force and continually challenge each other in terms of our cultural biases, which is another great thing about MySense. For example, we don’t want to just focus on white, western assumptions of wellbeing – we want to challenge these from an Asian and African perspective to develop a more holistic understanding of the term.

Separately, we want to make sure that MySense is a safe place to work, whilst also being inspiring and challenging. This is especially important given that no startup is ever fully liquid and there can be lots of stresses. I think we’ve managed to find the right balance and developed a great, supportive culture where we all respect one another and are motivated by the same mission.

I founded MySense in 2016, so it’s three and a half years old now! In the first year it was just me, but we’ve since grown to 42 people and growth projections are huge for the upcoming financial year. We’ve partnered with a number of care organisations in the UK and we’re rapidly expanding our global partnerships – it’s an exciting time.

We recruit a real mixed bag of people because we’re after a load of different skills. We have deep technical engineers, ops and finance managers, supply chain type people, a commercial team and clinicians! We’re looking to expand on all fronts over the next few years.

What does 2020 hold in store for MySense?

We want to spend a lot more time on the brand elements, for example on product placement and we’re looking forward to working with large companies like McCarthy & Stone. Expect to see roll out across those companies in 2020!

We’re also expanding into two new territories. MySense was incorporated in Canada last year and we’re launching in the Canadian market later in the year! Plans to launch in a European territory are also in the works.

Do you have any advice for people thinking about founding their own startup but currently unsure?

There’s a huge element of luck, which can’t be underplayed. Often, it’s about being at the right place at the right time. What works for one person, in virtue of the people they have spoken to and know etc., won’t work for another.

If it doesn’t work, just keep going! Tenacity is key – you’ve got to be a bulldozer and believe in yourself. There will be people along the way that won’t believe in your vision and won’t think it’s going to work. If you can keep going despite this and tune out the white noise – this is a great step!

Also, don’t underestimate the power of a great team. If you have a core team of brilliant people around you that share your vision, this counts for a huge amount. They challenge you on a daily basis, and you’ve got to make sure you are believing in them and their ability as much as you believe in yourself!

And lastly, founding a startup is very hard work. I have three kids and I’m always busy. I take the kids to school first thing in the morning, I then go to work and do a full day at the office before coming home in the evenings and putting food on the table. After I’ve put the kids to bed, I then keep working! If I decided to work a 9-5, MySense wouldn’t have happened – you’ve got to work really, really hard to make your dream a reality. It’s tough building something from the ground up!